The next project was to produce several designs for trophies which could be awarded to people who had made significant contributions to social networks via the web.  In discussion of the project there was reference to may be making trophies for those who did not deserve praise.

Well, I had a thought about bankers and how they use the net to their own purposes.  Probably they should have an award which offers nothing.  From that I thought of making a small hollow sphere in copper, coating the inside with lamp black and have a viewing hole – look inside and see nothing.

I cut two squares of copper sheet and set about annealing them and beating them into shape.  Annealing is a great process as it make the metal very workable but, as you work it, the metal hardens again. All you do is heat the metal so it glows a cherry red colour, then quench it in water [quicker than waiting for it to cool].  The heating causes oxides to form on the surface and they need to be removed by a process called “pickling” – the workpiece sits in a bath for a few minutes and the oxides come off.  If you don’t remove the oxides, they get beaten into the metal on the next round of hammering and will be difficult to remove at a later date.

Unfortunately, I haven’t got any picture of doing the process or the pieces as they developed – the video files are too big.  I had made an “error” by not starting with circles of flat sheet so I ended up with these 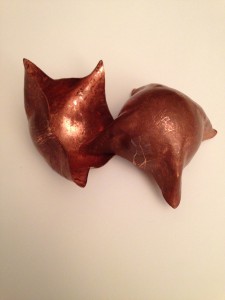 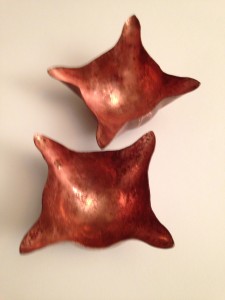 You can se that the “corners” have formed flutes on the cups which are pretty round.  I have abandoned the sphere for the Bankers idea but what can I use these shaped bits of copper for…..?

More for another day! Vincent