I mentioned in the last post that I had a large personal project on the go and here is the first instalment.

When I had taken the couple of busts into college [at the end of last year and the beginning of this one], I asked my tutor, Ed, if I could try making a full-size sculpture.  His reply was “why not?” but first make sure that it is a project.  Treating it as a specific project would mean that there would be a lot of thought about design, pose, size, etc and focus; all of which should lead to a successful outcome.

Well, it just so happened that the Ministry of Defence had recently announced that it would be concentrating soldiers in the north east at Catterick garrison and the Army presence in York would be no more.  York exists as a City in part from the Romans making it a garrison in AD 71, which it remained until they left sometime around AD400.  York again became a garrison in 1795.  So, why not make something to mark that momentous change?

Three rounds of maquettes to get happy with the arrangement – two figures sitting on the ground supporting each other back-to-back.  One a roman soldier, the other a modern woman soldier in battledress.  His head tipped down a bit and perhaps sad [can I model “sad”?] and her looking straight ahead, to the future.  Ideally, they would be on a plinth so children can look up into his eyes and the adults get to look her in the eye. 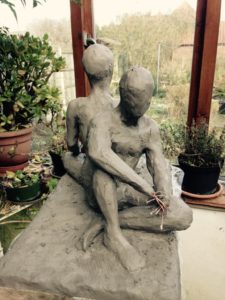 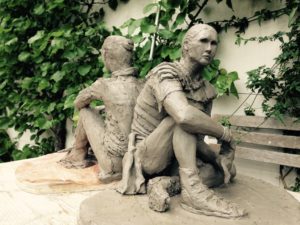 That took from February to May [while doing lots of other stuff].  Two members of staff kindly adopted the desired poses so I could get more detailed measurements.  And then it was time to make the full-size armatures [working off poses of two models standing with arms slightly away from sides, palms forwards] with thoughts on exactly where to position bends in armature relative to pose and limb lengths.  Get hold of pallets to raise the work up [add castors too] so by June I pretty much had the armatures finished and took a summer break! 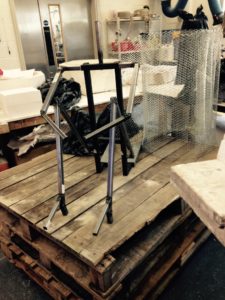 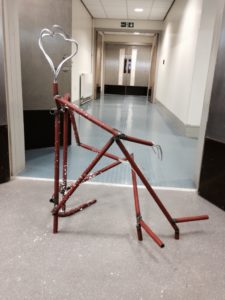 During the Summer, a roman re-enactment gentleman kindly posed in in all his kit so I could get an idea of how materials fell and similarly a woman soldier kindly did the same in battledress.

Each armature was then padded out with polystyrene – to keep the weight down – and covered in plaster and scrim – to provide a solid surface to work on. 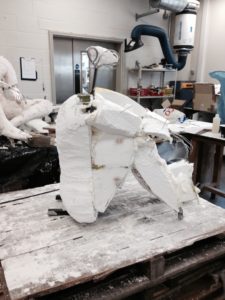 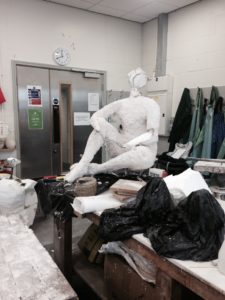 Finally a good coat of vinyl emulsion to stop the plaster sucking the water out of the clay – and by mid October the first bit of clay was on. 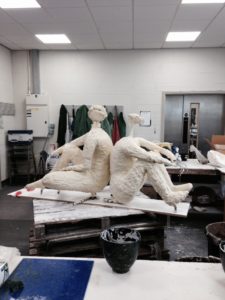 A month later and this is where I have got to with the roman [not started on the modern soldier apart from a half volume bust].  It’s still got lots of bits to add and the hands and face will be left until last as wrapping it up each day causes bits of damage here and there. 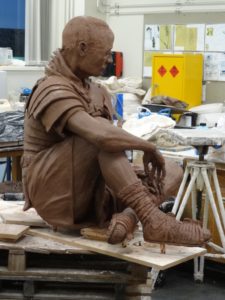 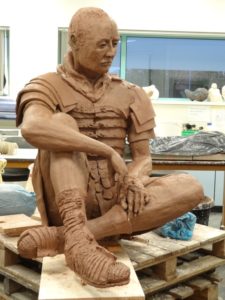 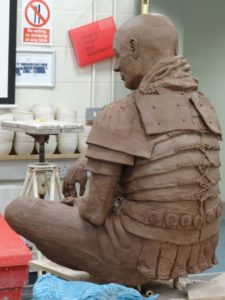 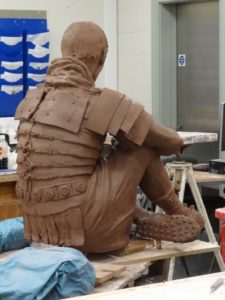 By the way, he looks to be levitating but that is on purpose; a 50mm lift from the surface allows me to model to where he would meet the ground but not have that ground getting in the way.  I’ll press on a bit more with his clothes and then start the modern soldier.