For the end of February and beginning of March I was in Amsterdam, looking after Izzie; Ben, Alice and Lottie’s Hungarian Vizsla while they were away skiing.  Had a great time museums and walking and this is a picture of us when we were in Jakarta. 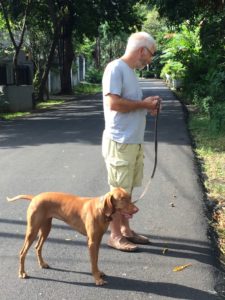 Since I got back, I’ve been pottering on several things but none are really in a state that I want to share.  I’ve been really good at making mistakes cutting with a chainsaw – funny how hard I found it to cut straight and square!  Moreover, I’ve repeatably managed to be too enthusiastic with the larger woodworking gouges which has necessitated taking off far more wood than I had originally planned.  One possible work gave way to another, as the block became too small for the previous idea, and now the block is progressing but is in a state far from completion.

However, the reason for this post is Lottie and Izzie.  Lottie likes making things, so while in Amsterdam, their new home, I bought some Plastiline oil-based clay for Lottie.  It isn’t as messy as wet clay and doesn’t dry out.  Lottie was keen to work with it when they got back from skiing but like all clays, it cannot stand up thin and tall.  I came home and made an armature using the square-section wire sold for the purpose and sent it off.  This is what Lottie posted via WhatsApp with a request on how to do the paws. 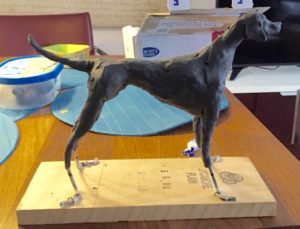 I had put little black marks on the metal where the bottom of the paws would rest [I think that you can see them in the photo] and explained that leaving a gap between the wooden surface and where the “ground” would be makes it easier to model.  I think that she has made an excellent model of Izzie and really captured the set of Izzie’s body pointing at some animal, and I especially like the head, the balance of muzzle to floppy ears.  Next up, Lottie says that she would like to try and make a pegasus and I’m still pondering on how to make a successful armature for the wings on scale similar to the Izzie model.  Hopefully, I’ll solve that problem before Lottie’s eleventh birthday next month!