My thoughts on social networks quickly turned to the net part of the word ‘internet’.  So, I explored how to craft nets and found stuff ranging from natives of Northern Canada using birch bark and gut or sinew to make nets to YouTube “How To…” videos of making nets by hand. First get your netting needle – so I made one out of a bit of wood that was to hand and tried making nets following the videos BUT it is very difficult!

There is a knack to getting the knot to tie in just the right place over the preceding loop – otherwise what you thought was a knot just slides up and down on the previous loop and all consistency in mesh size [technical term to size of holes] disappears. Moreover, the small bits of net I did make – and they were small – were of a large mesh size that wouldn’t translate to a trophy.

Before we move on to making more nets, I had considered getting loads of small railway modellers’ figures and making a mould of them interlinked – each body like the knot of a net – but I abandoned that idea as a bit twee. Then I though of making a big net needle – and here’s where making yourself vulnerable comes in – as the trophy… 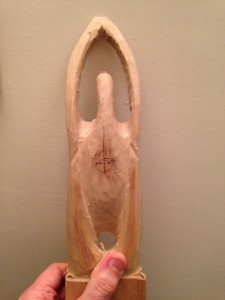 …but as you can see it does not merit further consideration [whilst the little bodies was a bit twee, this idea of a large netting needle is crass!].

What if I make a net of smaller mesh size? It will need a thin net needle and that will need to be long so that it can carry enough twine to make net without having to stop and reload it. Here is that needle before [a new kitchen spatula], “naked”, and loaded with green twine and with my hand for scale plus some net too. 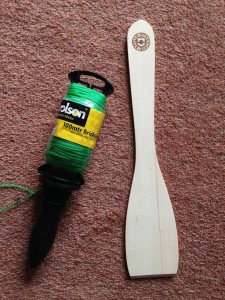 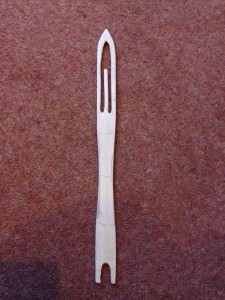 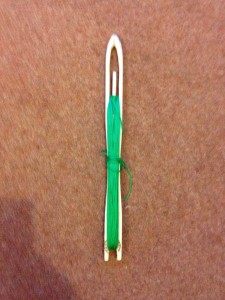 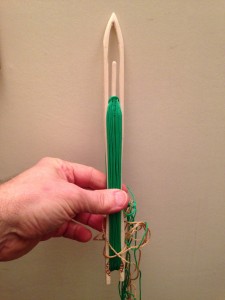 Jill had a little better success in making net but it was still of too large a mesh and hard to construct.  Moreover, I’d have to get any into a more solid form to be part of a trophy or work out how to make it “hang” successfully as part of a trophy.

Looks like two more blogs and we’ll have caught up on the Trophy project and the course!  That hasn’t taken long has it? Vincent