One of my lines of thought for trophies has been how to represent exponential growth in social media – the trophy is supposed to be for someone [or group] who/which has contributed to social development using the internet.  I thought that spirals might might be a starting point but  how to do that??

Did think of how lots of straight lines can form a curve…. 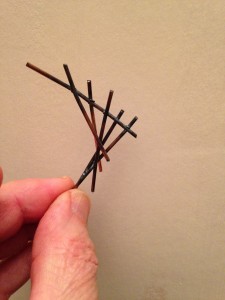 … And used fine brazing rod spot-welded together: Takes a lot of care to get it hot enough to form an acceptable weld but not too hot to melt both rods and have it go floppy or fall apart.  Samples made so drew out a spiral quickly using a compass [draw increasing quadrants with each one meeting its neighbour as if smooth curve – I’ll draw it out as a blog if asked!].  BIG MISTAKE!.  In my rush to get something manageable and enough spiral I made an Archimedean spiral [constant rate of growth] rather than one with exponential [logarithmic] growth, like in snail shells. 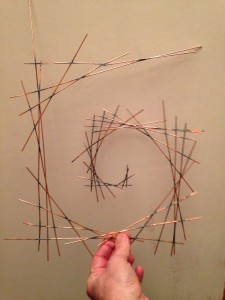 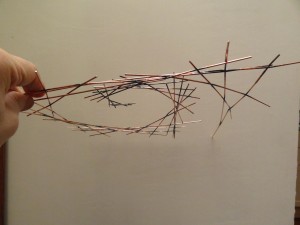 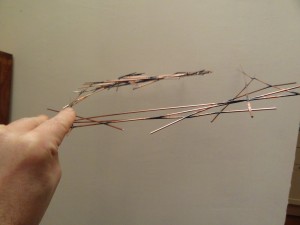 Not the first time something like that has happened, the logarithmic spiral sometimes called the Spira mirabilis, [Latin for “miraculous spiral”], was of great interest to the mathematician  Jacob Bernoulli for how many things remain constant in such spirals as they evolve.  Because of his fascination with the spire mirabilis,  Jacob wanted such a spiral engraved on his headstone along with the phrase “Eadem mutata resurgo” (“Although changed, I shall arise the same.”), but, by error, an Archimedean spiral was placed there instead.

Hey ho, back to the drawing board as it were….  Vincent