I cannot stick a definite date on when I started this journey.  Certainly I was moving in the direction of craft by carving a few spoons from our dead plum trees in 2011 and buying some Pfeil gouges that Christmas while taking carving lessons at the Yorkshire Hut Co.  First proper try at carving something bigger was a copy of Malliol’s “Night” in yew – Jill is very fond of it but I’m still seeing all the faults in it. 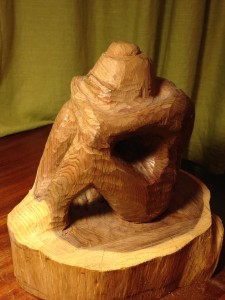 Progressed since then but not finished anything – I make mistakes on a piece and decide not to pursue making more mistakes on that piece and move on.  That said the lizard sits on a mantlepiece and I have given some non-figurative sculptures away. 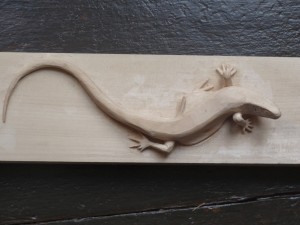 BUT the course at York College started for me in October.  Somehow I want to get the three months or so from then ‘till now recorded in this blog [but that is all going to be with hindsight] but also comment on what is happening as it happens [well, near enough].

One of the surprising things that has happened is that I have only tried carving wood twice since starting the course.  I soon gave up at college as the slim gouge kept losing its edge in the wood.  Its was the first gouge I’ve used where the blade would just chip off in the wood. Wasn’t enjoying that carving as the bench was too low and the workpiece moved too much in the small vice.  However, I did spend an afternoon in late November at home carving a heavy man [rugby player perhaps]. 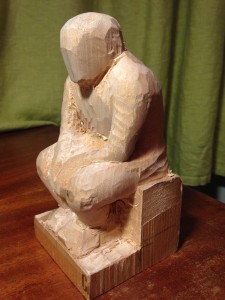 First piece finished at college was this bowl turned from a log of cherry taken from a felled cherry tree at my old workplace, Leconfield, near Beverley in East Yorkshire.  Its a heavy shape as I did not want to have the central rot of the log fly out of the rim while being turned and have no edge or bowl to speak of.  The clay throwing will come later once it has been glazed. 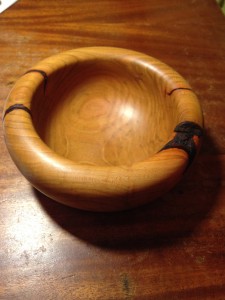