About the time I joined the course my full-time colleagues were about to hand in their first project “Interlocking”.  Brief was make three things of each of three different materials [so nine materials in all] and explore the interface between the materials, the properties of the materials and develop skills in working with the materials.  All good stuff if you’re on a course about 3D crafts.

Full of enthusiasm, I thought that I might catch up and for the days and evenings of that first week I was mostly wrapped up in the theme of interlocking.  However, I questioned the shorthand of “3D” – what about time, what about the other dimensions of life such as music and literature which engage us?  What about memory and emotion?

So, with all my thinking I ended up with a triad of triads.  I’ll offer the first triad now and, hopefully, will get the others out over the weekend.  Underlying theme for the first triad was books.  After all, bookbinding is a craft, books carry knowledge and art; they define history.

The first book is called Tomé [Greek to cut or slice] and consists of a piece of an old wool blanket as the cover [protecting the contents – security blankets and wool shrouds from ages ago]. 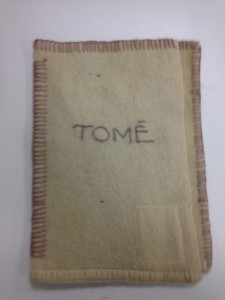 Inside the pages are nylon gauze of a pink, which made me think of wombs and amnions, and a grey brown, chosen to make the images seem more vague.  The images were chosen from drawings by Leonardo Da Vinci to try and match the Seven Ages of Man speech of Shakespeare. 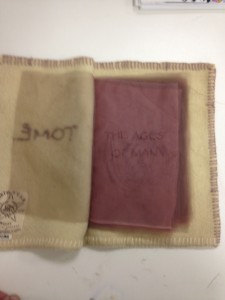 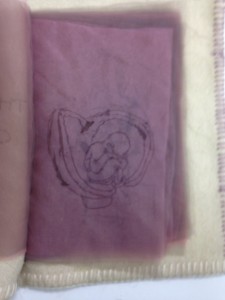 The second book is titled “Topology;  A Primer” and is made of paper, loom bands and a knitting needle.  Topographically, none of the items are interlocked [like rings on a chain are interlocked], since the act of lifting the last loom band over the pointed end of the knitting needle would lead to the whole book falling apart. 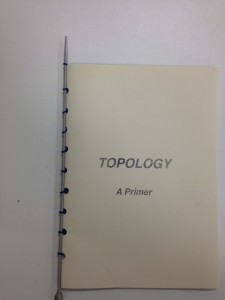 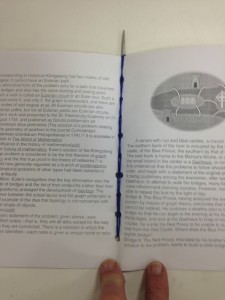 I chose a knitting needle for the spine as knitting is such a strange thing: A long piece of yarn gets looped around itself and produces a sheet of material.  There’s not even much in the way of knotting when knitted panels are brought together to form a garment.

The final book of this triad is a hardback folio edition with words from “A Tale of Two Cities”. 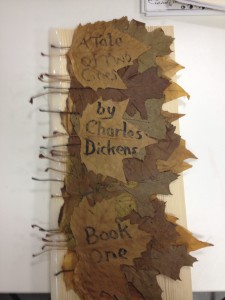 Leaves have been stuck to a chunk of wood using glue gun refills and the opening paragraph was written on some of the leaves using indian ink.

Next will be the Interconnectedness of all things [or something like that was penned by Douglas Adams for his character Dirk Gently].  It’ll be coming soon.