That’s a Homer Simpson “D’oh” moment.  The mould is leaking from loads of places and difficult to control; what can I do?  D’oh, there’s a tube of sealant sitting on the bench in front of you, and it sticks to sealant.  Why not go over the leaky bits and close up edges as much as possible? Did that and poured another cast [but limited by the amount of plaster I had to hand]. 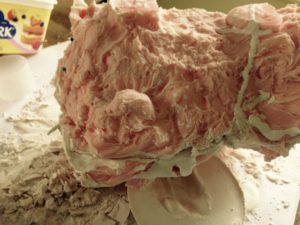 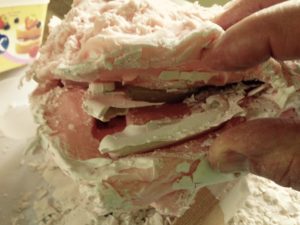 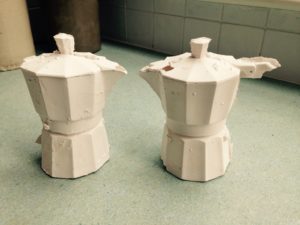 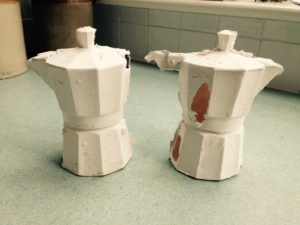 Mould doesn’t look much different but it leaked a lot less.  Strange thing is the 1st cast [on the left] when weighed with handle and missing bottom is 143g and the 2nd cast with handle [it retained a base] is 145g.  A re-run of pre-sealing bits I don’t want to open, a bit more plaster, and a bit more moving  the whole lot around before the plaster sets might generate a “complete” pot.  on the other hand, given the translucency of the casts [1st with candle and 2nd daylight], 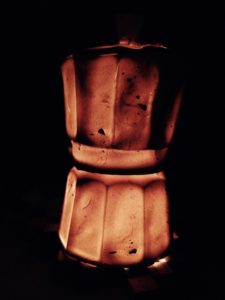 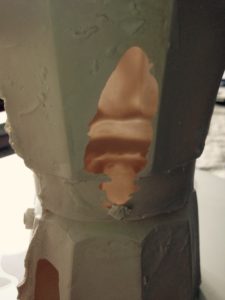 I could consider making 1/2 moulds with thickened edges for mounting as lamp shades [LEDs inside].  Whole lot would be extremely fragile.

While on lamps, the idea did cross my mind of making coffee flowing from pot in clay [probably cast pot and coffee flow as separate pieces to get some strength in latter and a tube inside for wire] and have coffee as a lamp’s base and upright with pot glowing on top – very kitsch.