In an earlier post you will have seen the results of me experimenting with silicone bath sealant, cornflour, and paraffin oil as a flexible mould material [Walnuts & coffee, March 2017] and this time I chose to use the silicone straight from the tube onto Plaxtin and then make a casing.

I expected the bead lines of sealant to merge [they did not] and my stuff from B&Q to be better at making a casing [it was only a bit better].  The result is here – I have put the plaster cast on a brick which I think serves nicely as a pedestal, or is it an allusion to the man’s background, or is it representing the torso; the “triple heater” [San Jiao] of Chinese medicine which derives from the three cavities of the torso [chest, abdomen, pelvis]. 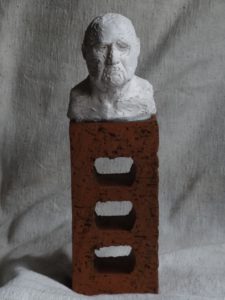 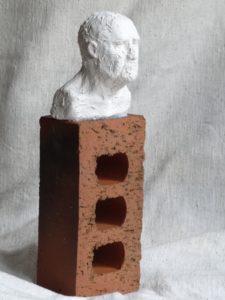 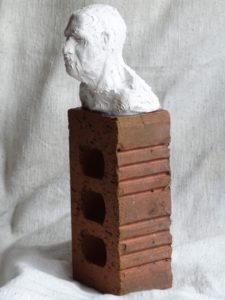 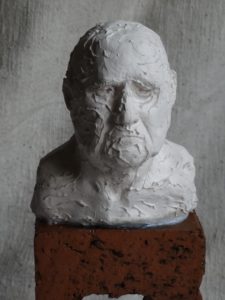 It’s a bit of a mixed bag – i’ve lost some of the detail of the Plaxtin original but gained a textured surface which I think makes it more rugged.

The Plaxtin does have the advantage that it doesn’t dry out so I need to try taking it into town and “sketch” people.  I think that I probably prefer water-based clay for the finishes available and ease of cleaning up after use – and it’s a lot cheaper too!