Some of you will be aware that I’ve been getting involved with Soldiers’ Arts Academy and via them I was introduced to Troy, a British Army veteran living in Yorkshire.  I was privileged to meet him at his house, chat, take photographs, and some measurements for a bust.

I did most of the work on the bust before the summer arrived and have spent most of the last two days fine tuning what I wanted and hollowing it out so it can be fired.  Often it is best to have some sort of armature to help hold the clay up as you build and, if you use a fair amount of paper, you can keep the weight down.  The armature and excess clay need to be removed otherwise the clay will shrink around the armature and cause cracks [and even if it didn’t college would not allow the whole lot to go in the kiln].  The excess clay is taken away to give a quicker drying time and hopefully less likelihood of breaking in the kiln.  I thought I’d show something of the process. 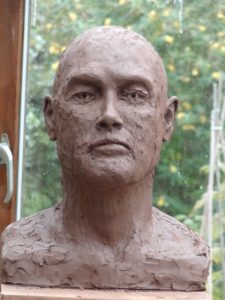 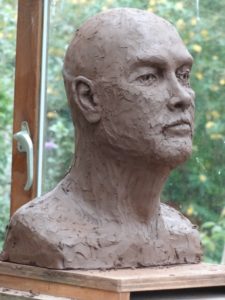 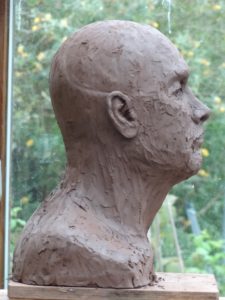 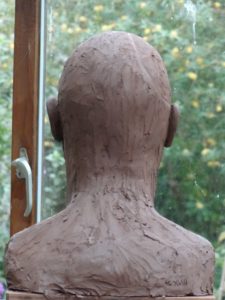 Here’s the completed bust before removal of the armature and hollowing, the line on the right of Troy’s head is from surgery. 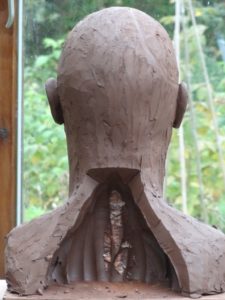 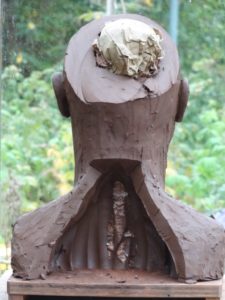 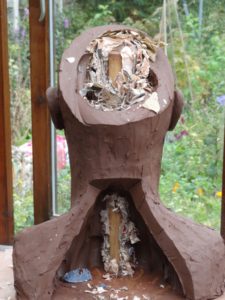 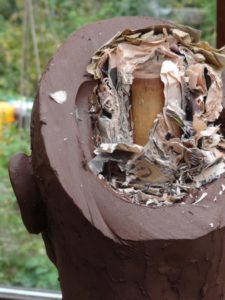 I cut a segment out of the top of the back using an old ham slicing knife – long thin blade – and started to hollow out; to get feel of how soft the clay was.  Next I cut down the armature through the skull and revealed the paper around the wooden post [there was more paper where the head is].   the segments cut away need to be carefully stored  while the hollowing takes place. After lot of careful tearing, cutting, and scooping, the main part was almost ready to have the cut away portions replaced. 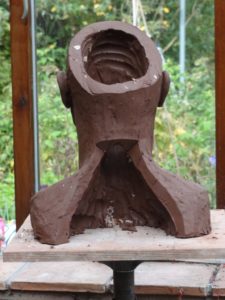 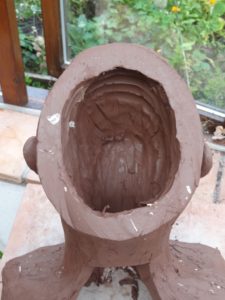 The cut surfaces are cut into with a knife, sprayed with water and costed in slip [watery clay of the same sort as used for the modelling] and some very soft clay was also added at the inner margins.  The cut sections are offered up, and gently squeezed into place.  The outer surface [and a few millimetres deeper] is re-worked to try and get the portions to stick and to disguise the earlier cut.  The process is rather messy and I only took pictures of putting on the last piece. You may notice some holes in the piece which forms the upper back, these were made by a BBQ skewer to try and ensure that any air pockets might be opened to a free surface and not explode in the kiln [I did the same to the big piece but after the photos above were taken]. 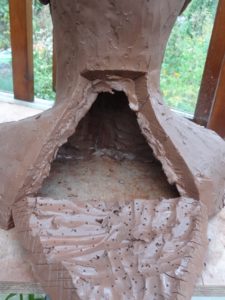 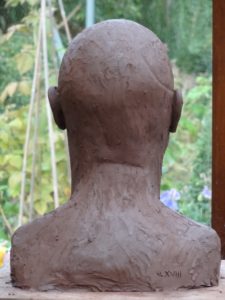 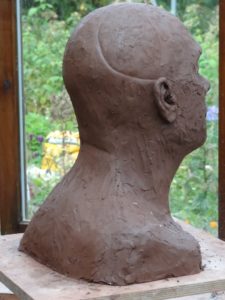 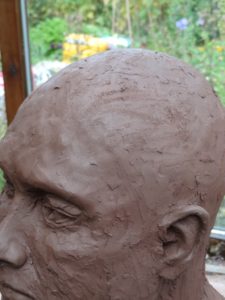 Then I had to tidy up – looked like a rodent’s nest on the table along with my tools. 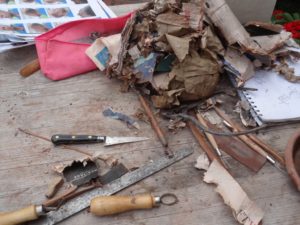 By the way, the mark on the back of the neck is intentional as Troy has a crease there [but I may soften it off a bit in the next day or two].

I now leave the piece to continue to dry [and hopefully not warp] and then it is destined for the kiln.

Overall, quite and enjoyable process and I look forward to doing some more.