Almost as an aside while making the copper “cups”, I had been working on turning a wooden bowl with thoughts of decorating it with a lace pattern.  To make a complete entry, I’ll carry on to completion, which occurred in early January.

The wood was rippled sycamore that I hd bought a year or two back and by early December it was like this. 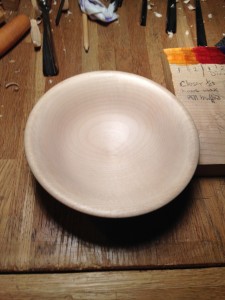 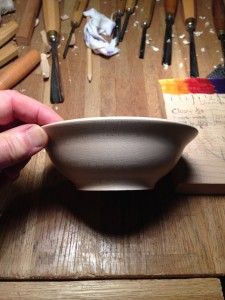 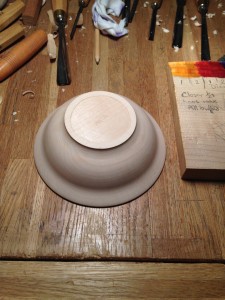 I hope that you can see it looks a bit like a large rice bowl and that the wood is pale [although, like all woods, it will oxidise and become darker over time].  With regard to the colour, to bring out a lace effect I had been thinking of blueprint dying [sun and ferrocyanide] but found that it is an unstable dye and somehow getting a resist on the lace, print the resist on the bowl and paint with ink. So, here’e the trial scrap of wood with the various inks on with grain and cross grain cuts  to see how they fared. 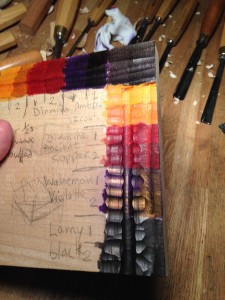 The old violet had developed a burnished appearance and so I chose that – but how to get a “positive” print of the lace on the wood?  Asked the printing department and the fashion department too; nice enthusiastic people but problem still there.  Under my nose, as it were, was the water-based wax resist for ceramics.  Not solved yet as the lace is flat, the bowl is curved and resist will drip but also dries quickly.  I then had a cunning plan – cover the inside of the wooden bowl with cling film and build a papier-mâché form.  When that is dry, cover it with cling film and then arrange the resist coated lace on it.  When happy with the arrangement, place the bowl on top and gently force contact as best as possible trying not to smear or miss an area. Applying the lace to the outside of teh bowl was a lot easier. I did the “printing” at college and it had plenty of time to dry while as I took it home to apply the ink. 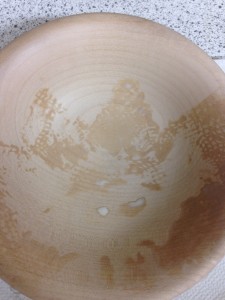 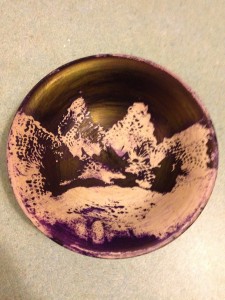 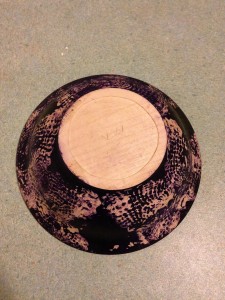 Now I’m stuck with trying to find if there is a way of keeping the burnished effect form the ink and not lose it by applying a sealant, oil, or wax.  For the time being it will sit “bare” and come out for the tutors to consider when they look at what I’ve been doing along the path to one or more trophies.