Same process as last time of trying to carefully cut away the plaster mould, hoping not to chip it in the process, and hoping to be free of holes 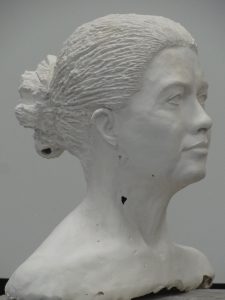 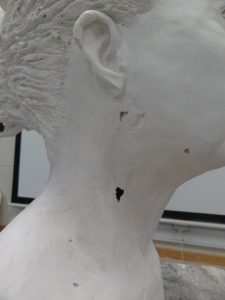 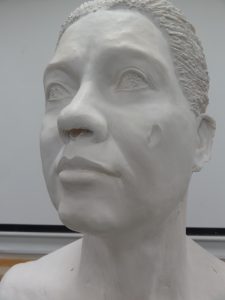 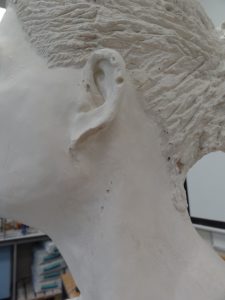 Both ears lost to bubbles [as are the pupils and septum of the nose], there’s a large void in the chignon, a defect at the right jaw angle, and the print of my plaster flicking hand having hit the left cheek!  There are also gouges in the plaster from the chisel used to remove the waste mould.  Having said that, the chignon came out quite well and most of the surface is there.  The pictures above are pretty much how the cast looked by close of play Monday.

Today, it was repair time, “killing” plaster as Toft suggests, and then getting it onto wet parts of the cast.  There is a lot of time pressure as early on the plaster is very runny [single cream], then it thickens and will start to hold shape but then it quickly goes off so it can’t be handled.  However, has not gone hard enough to model or carve.  Carve too early and bits fall off, carve too late and the plaster is a lot harder and therefore difficult to carve.

I hope that you can see on the pictures below that I’ve attended to all the problems except the hole in the chignon, which i like, and the eyes [better done with some drill bits – sounds nasty].  Still not sure about the hairline; maybe fashion a headscarf or turban…… 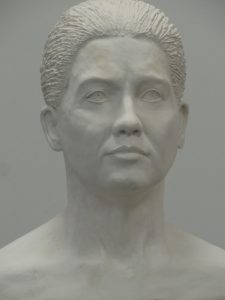 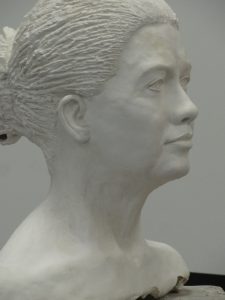 Once I’ve sorted the eyes, I shall photograph again in better light – and will turn my attentions to a mount/stand as a finished piece for college.