When I submitted the pieces for the interlocking project, I also provided a short video – short but not short enough to be uploaded here.  That video described the pieces and the background thinking to them.  I titled the video “Interlocking, or The Interconnectedness of All Things, or a True conceit” [now titles of the posts].  The video ranges from pre-history artifacts with maker’s marks and decoration to how some modern art exhibitions are curated by artists.  Along the way there is the question of “who defines what is art?”

Using “A True Conceit” in the title of the video was a play on meaning – a conceit maybe “excessive pride in oneself”, or “an ingenious or fanciful comparison or metaphor”, or “an artistic effect or device”, or “a fanciful notion”.  Which of these definitions was/were “true” for the video or for the pieces submitted for the project?  You, dear reader, get to decide.

So, to the last of triad of the three triads.  And again I have to disappoint in not producing three but only two and then refer to two other things.  You may recall that I questioned the shorthand of 3D in that it ignored the fourth dimension of time and what time gives us in the way of experiences and dimensions to our lives. 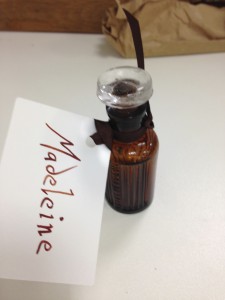 I suppose a small bottle with a label tied to its neck is usually associated with Alice in Wonderland.  But, instead of saying “Drink Me”, it says “Madeleine”.  Open the bottle and sniff.  There is a hint of vanilla, or perhaps something else.  Thing is, the old part of your brain involved with smell and emotion starts bringing up thoughts and memories associated with that smell.  I was trying to make a reference to Proust’s classic “A la Recherche de Temps perdu”, – In Search of Lost Time”.  Proust discussed how the taste and smell of a madeleine dipped in tea provoked involuntary reminiscences in the narrator:  there is an interlocking of smell and memory in time. 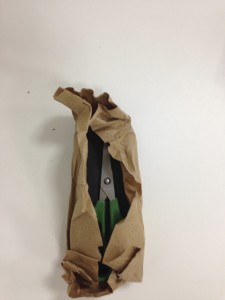 It’s a bit difficult to see but the piece of craft paper is loosely wrapped around a pair of scissors and a stone. On the one hand they allude to the playground game of “Stone, Paper, Scissors” [so there is again an interlocking with memory; perhaps reminiscences of playing the game but certainly the rules of the game].  BUT, the tangible items are superfluous to playing the game, since the articles are symbolised in the game by hand gesture.  It is the symbols that are locked in the circular order of power: Scissors cut paper, Paper wraps Stone, Stone blunts Scissors.  The real items as I presented them do not obey these rules  of the game as the paper is wrapping both the stone AND the scissors and the stone is specifically for sharpening blades not dulling them.

I couldn’t decide on the third item as I thought of two things that both had merit.  One is MONIAC  (Monetary National Income Analogue Computer) also known as the Phillips Hydraulic Computer. 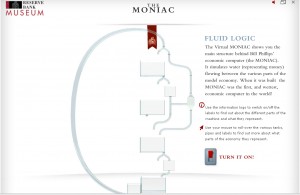 In MONIAC, water flows from and to various tanks and is controlled by opening and closing valves; the flow of water equating to the flow of money in the economy.  The flows in time are intimately interlocked, reduced flow in one part has knock on effects elsewhere.  An example of MONIAC working at Cambridge University can be seen on YouTube.

The other option were Lotka-Volterra equations, which [as you will see if you make the picture larger] are important for modelling predator-prey competition, disease versus the immune system, competition in markets and some chemical reactions. 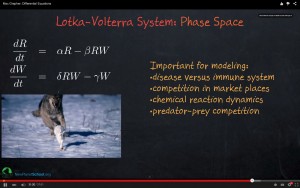 Adjusting the parameters, alpha, beta, gamma, and delta, affects the interlocking of, say, prey and predator populations.  In modelling the process, the experimenter can manipulate these parameters in an iterative way to see what values best reflect real life data.  YouTube has examples of the equations being animated.

Thank you taking the time to follow my blog. Vincent