Here is the outcome of some more throwing and glazing.  First up are three pieces from the pugged clay that gets recycled at college with the same overall glaze but a second glaze applied in different ways.  The wide mouthed vase was dipped in one glaze and then I tried to dip the widest portion in.  I think that it looked better before firing – in matt pink and orangey brown as in the right hand picture. 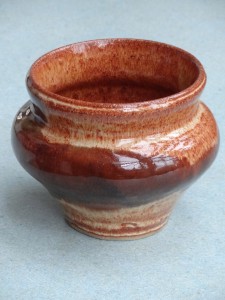 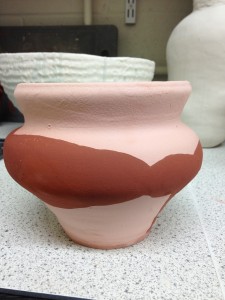 The more slender vase was likewise dipped in the first glaze but then I trailed fingers wet with the second glaze over the first; there a few drips which ran in different directions.  In comparing the left and right images you can see how firing changes colours and sharpness of edge and the  one orangey brown pre-firing comes out with some very dark browns, which have “sunk” towards the base of the vase while the glaze was molten. 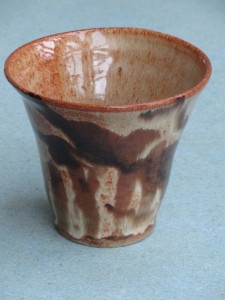 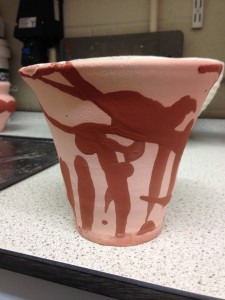 Final pugged clay is a flatfish bowl with the second glaze dripped on top and spread around the rim.  Perhaps it is easier with this piece to see how much the second firing affects the pattern edge and consistency of colour. 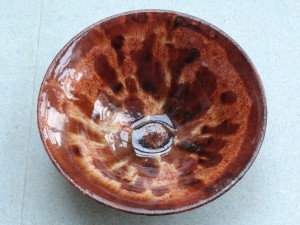 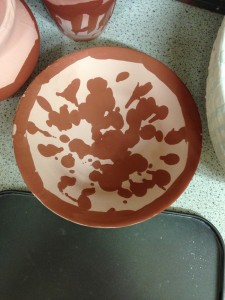 With all of the above pieces, I think the overall glaze helped the second glaze to run and spread out.

The other three pieces are in a St Thomas’ clay, which has less iron in it so offers less brown to the glazes.  The overall glaze was supposed to be a dolomite matt opaque glaze but I don’t think much of the opaque elements are present – I did give it a very good stir!  Also, there was a slight rush on to complete the glazing ready for the firing and I didn’t take shots of the pieces below before they were fired – sorry I shall try to do so from now on. 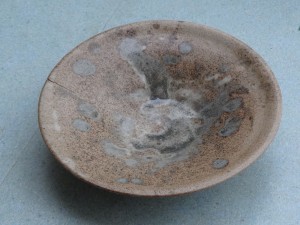 This is another shallow bowl and I dripped the second glaze on it.   Depending how thick the drips were has affected how much they have run into the bowl.  Unfortunately, there is a crack in the rim [at about 9:30]. I was  surprised that it has survived the two firings and not broken. 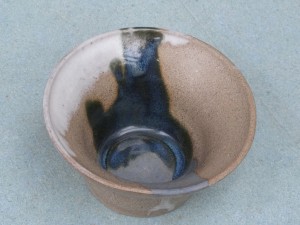 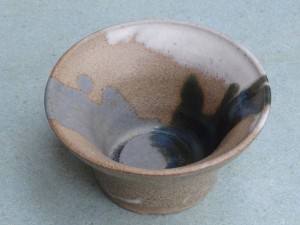 This odd shaped bowl had two different glazes poured in off my hand – scooped the runny glaze in a cupped hand, poured it in towards the base and then poured the excess out over the rim. Then did the other glaze – the white on the edge is from the overall glaze; a bit of serendipity as I think it would have looked less interesting if the white was all over. 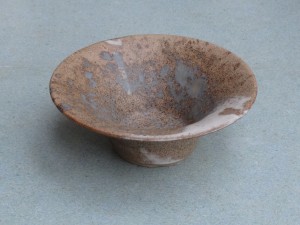 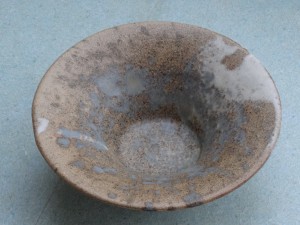 And the final piece [which I’m pleased with both the shape and pattern] had the second glaze flicked on it while I still had traces of the pale bluish glaze on my fingers.  The white [1 to 3 o’clock is, I think, some of the dolomite white].

Haven’t been on the wheel for awhile so it’s probably time to have another go – if I can get hold of some St Thomas [or other low iron clay for throwing] before it all gets used up.

2 thoughts on “Notes from the wheel & glaze room”